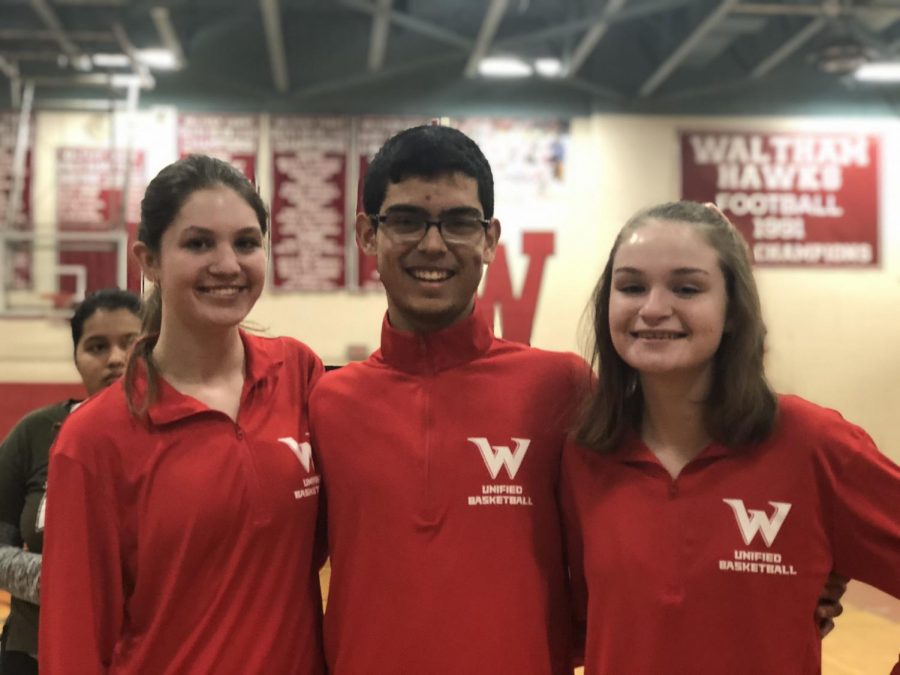 On a crisp Tuesday morning in November, the team members, coaches, and mentors of the newly formed Unified Basketball at Waltham High came together to celebrate an MIAA Sportsmanship Award. As they cut into a cake, with the word “Congratulations Team!” iced on in bright red frosting, team members discussed the team’s season, how they are doing, and their collective strengths.

“We’ve worked really hard this year and have done a bunch of team bonding activities,” said Aleah Kearsley, a junior on the Unified Basketball Team. Commenting on what they have worked on this year, as well as their strengths, Kearsley said, “We are really strong as a team. We stretch our people our on the team, and make sure everyone is actively playing in the game.”

During the award ceremony, Gabe Millan Jr., a junior on the team, commented, “We’ve won two and lost a few… we work really hard and our bond is very good this year.” Reflecting on the strengths of the team, he said, “We have great sportsmanship… we always help each other.”

When asked what the award means, the team responded, “it definitely means a lot. We’ve worked so hard as a team, and it shows that the hard work pays off. We always try to be very positive when we are playing basketball and make sure that everyone is included.” The team as a whole feels truly honored and excited that they received this prestigious award in their first season ever at WHS.

As the award ceremony came to a close, and almost all of the cake had been gobbled up, a long-lasting impression of the community created by the Unified Basketball team hovered in the air. They not only support their team members but encourage players to reach their maximum potential, all while developing lost-lasting friendships and a powerful bond within the team. The team is extremely enthusiastic about continuing their first season, and cannot wait to see what the following years and seasons have in store. The players work hard both on and off the court celebrating each other and the success of the team, their unified community.